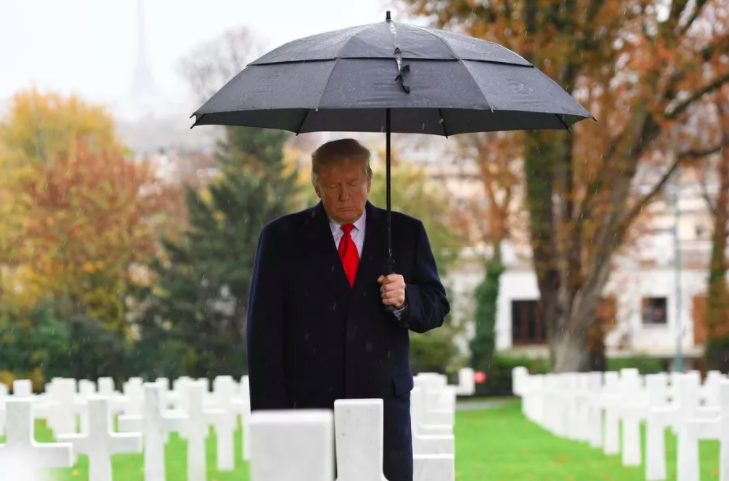 Donald Trump participating in a ceremony at the American Cemetery of Suresnes in 2018 as part of a Veteran’s Day commemoration. Photo by Saul Loeb.

Last week multiple reputable news outlets including The Atlantic, Associated Press, The New York Times and The Washington Post, reported that President Trump disparaged US troops, veterans and missing service members by calling military members “losers” and “suckers.” However, Trump and his staff continue to dispute these claims.

Trump is known as a big military booster, he often talks about his administration’s large defense budgets and push for military parades. But with the current claims, he could lose mass support in the upcoming election.

When Trump canceled a visit to the Aisne-Marne American Cemetery in 2018, he blamed the rain for the last-minute decision, saying that the helicopter couldn’t fly and the Secret Service wouldn’t drive him. Unfortunately, this was not the case.

According to four inside sources, Trump rejected the visit because he didn’t believe in honoring the fallen American soldiers. In a conversation with senior staff members on the day of the scheduled visit, Trump said, “Why should I go to the cemetery? It’s filled with losers.” In another conversation on the same trip, it was reported that Trump referred to the marines who lost their lives at Belleau Wood as “suckers” for getting killed.

This battle is notable in American history because it was when the American and allied troops stopped the German advance towards Paris during WW1. The ground on which it was fought is ventured by the Marine Corps. But Trump was unaware of this significance asking, “Who were the good guys in this war?” He also didn’t understand why the U.S. joined the allied forces.

This was not a one-time incident. He often ridiculed former Senator John McCain since he was one of the few prominent Republicans to criticize him after he won the 2016 election. When McCain died in 2018, Trump expressed denigration for his service, even though he spent over five years as a prisoner of North Vietnam.

According to three sources with direct knowledge of this event, Trump told his senior staff, “We’re not going to this loser’s funeral”  He then got angered when he saw flags lowered to half-staff, which is a symbol of mourning, and continued on to say profanities towards McCain.

It is also noted that on Memorial Day 2017 Trump visited Arlington National Cemetery. He was accompanied by John Kelly, former Secretary of Homeland Security and White House Chief-of-Staff. The two men visited Kelly’s son, who was a first lieutenant in the Marine Corps and tragically died in Afghanistan in 2010. Sources state that while standing at his grave, Trump turned to John Kelly and said, “I don’t get it. What was in it for them?”

Since none of the sources have come out publicly, Trump has retained much of his following. His supporters will not believe these statements are true until they do. Perhaps the sources for this story fear repercussions.