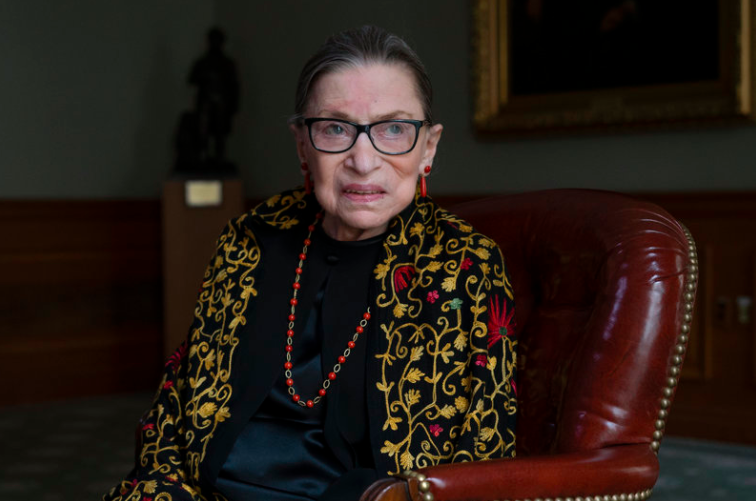 Ruth Bader Ginsburg in her chambers during a 2019 interview with NPR. Photo by Shuran Huang.

Justice Ruth Bader Ginsburg, a legal, cultural and feminist icon died on Friday from complications with metastic cancer of the pancreas. The Supreme Court announced her death and confirmed that she died in her home surrounded by family members.

“We at the Supreme Court have lost a cherished colleague. Today we mourn but with confidence that future generations will remember Ruth Bader Ginsburg as we knew her, a tireless and resolute champion of justice,” said Chief Justice John Roberts.

Ginsburg served 27 years on the nation’s highest court, becoming one of the most prominent members.

Beforehand, Ginsburg graduated in 1954 from Cornell University. Two years later, she went to law school at Harvard, one of nine women in a class of 500, and transferred to Columbia. Here she graduated first in her class.

“The study of law was unusual for women of my generation. For most girls growing up in the ’40s, the most important degree was not your BA, but your MRS,” Ginsburg said.

Even with her excellent academic records, she faced more discrimmination when looking for a job.

“I was Jewish, a woman, and a mother. The first raised one eyebrow; the second, two; the third made me indubitably inadmissible.” said Ginsburg

She eventually became one of the few female law professors in the country when she was hired by Rutgers Law School in 1963. However, she still had to fight for equal pay. The dean made the excuse that her male counterparts had to support a family, while she had a husband who could provide for her. So she and other female employees filed an Equal Pay Act complaint-and won.

While being a professor she co-founded the first law-journal on women’s rights. She would spend many hours writing and editing, counseling the staff, attending meetings, and mediating with the administration when problems arose. It is still publishing forty years later.

In 1972, she co-founded the Women’s Rights Project at ACLU (American Civil Liberties Union). The organization would refer sex-discrimmination cases to her which she would take in measure incremints, working on one law at a time.

Throughout the 1970s, she brought six cases before the Supreme Court. When combatting sexism, Ginsburg would bring up lawsuits in which men were being treated unequally because of their sex. She thought that the male judges would appreciate the injustice in a case where the men were the victims. By winning those cases, she was able to adress the sexism women suffered.

In 1980, Ginsburg went from arguing cases to hearing them when President Jimmy Carter appointed her to the U.S. Court of Appeals for the DC Circuit. Then in 1993, President Bill Clinton nominated her to the Supreme Court. She became the second female justice and first female Jewish justice. She was one of only four female justices in American history.

Ginsburg was known for her powerful majority and dissents. She often broke legal tradition and called upon Congress to change unfair laws. Her hard work led to President Obama signing the Lilly Ledbetter Fair Pay Act in 2007. This relaxed the limitations on fair pay complaints.

“I like to think most of my dissents will be the law someday,” Ginsburg said in 2015.

In 2013, she became the first Supreme Justice to officiate a law that fought for same-sex marriage, which was later legalized in 2015.

Before her death, she was at the height of her popularity. Her trademark style made her iconic. She was impersonated on Saturday Night Live and Felicity Jones portrayed her in the film, “On the Basis of Sex.”

Her death will inevitably set a political battle over who should succeed her. It also brings the Supreme Court’s vacancy into the presidential campaign.

“My most fervent wish is that I will not be replaced until a new president is installed,” said Ginsburg just days before her death.

She was aware of the political uproar that is bound to happen. Her death will have consequences for both the court and the country. Inside the court, she formerly led the liberal wing. Now that the court is about to open a new term, the chief justice no longer holds the controlling vote–there is no clear court majority.