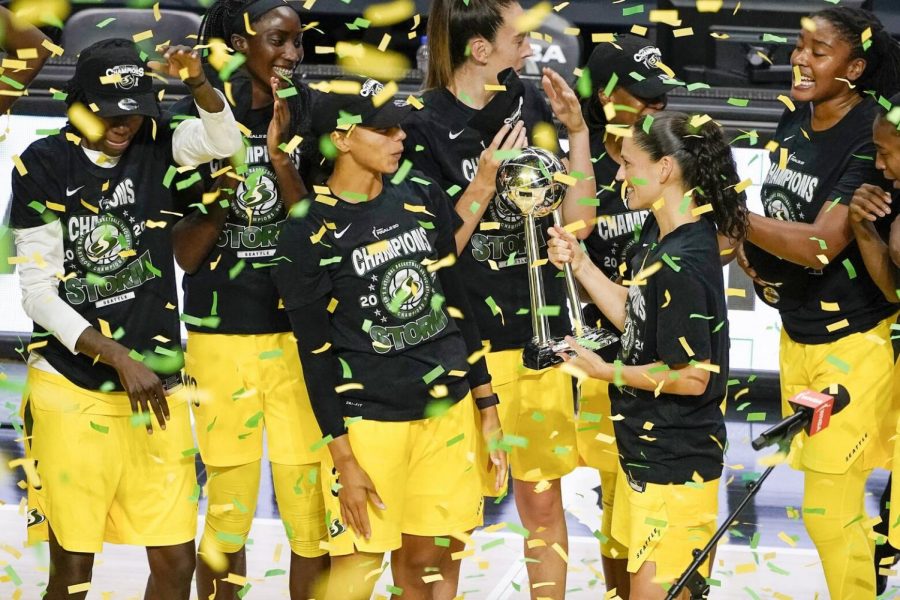 The women’s national basketball association (WNBA) held the first game of their finals on Sunday, October 7th, 2020. The Seattle Storm and the Las Vegas Aces faced off for this title in a best-of-five finals series in Bradenton, Fla., and ended up only playing three games.

In-game one the Storm defeated the Aces 93-80. During this game, Seattle Storm guard Sue Bird broke the WNBA Finals and WNBA Playoffs record with 16 assists. Her teammate Breanna Stewart also broke a record by being the first player to ever score at least 35 points and get 15 rebounds in a Finals game. She scored 37 points and is the second-most in finals history.

On the Aces, A’ja Wilson had 19 points in her Finals debut, while Angel McCoughtry had 20 and shot 5-6 from the three.

Game two was another win for the Storm. After the win on Sunday, October 4th the Storm was only one win away from capturing their fourth WNBA championship in franchise history. The Seattle Storm won game two over the Las Vegas Aces 104-91 to take a 2-0 series lead.

Seattle’s 104 points were the highest amount of points scored in the 2020 playoffs. They also set a WNBA Finals record with 33 assists and 40 field goals made. Stewart scored a game-high of 22 points, while her teammates Alysha Clark and Natasha Howard both scored 21 points.

The Aces scoring was led by Wilson who had 20 points and 17 points from her teammates Angel McCoughtry and Emma Cannon.

The third and final game of the series was a blow-out. The Storm defeated the Las Vegas Aces 92-59 on October 8th completing a three-game sweep.

Stewart finished with 26 points and was named WNBA Finals MVP for the second time in her career. She averaged  28.3 points, 7.7 rebounds and 63% shooting in the series.

“I wasn’t sure if I was ever going to be back to where I was,” Stewart said. After she suffered from an achilles injury last season, “But to be able to be here, to be able to see myself playing like this and having so much potential going forward, it’s exciting.”

Bird is now the 10th player to have four titles with a record 16 years separating her first and fourth title.

“The fact that I’m sitting here, I think I’m having this, like, in-shock moment because it doesn’t really feel real that we just won and that I was able to contribute in the way that I did,” said Bird, who has been a part of all of Seattle’s titles.