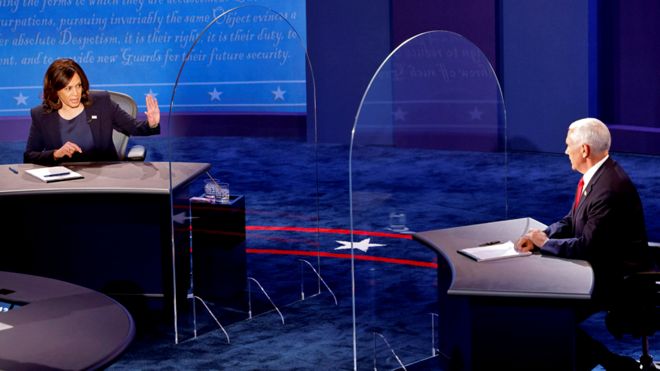 The vice presidential debate happened on Wednesday, Oct. 7,  at Kingsbury Hall at the University of Utah in Salt Lake City. Moderator, Susan Page of USA Today, was very clear from the beginning, that she would not tolerate any rule breakers during the debate. Hinting at the presidential debate on Sep. 29 that was very uncivilized and messy, hoping, this debate will be better. The debate between Kamala Harris and Mike Pence was easier to break down and understand.

The first topic that kicked off the debate to be discussed was the coronavirus outbreak. Harris started off the debate by speaking about how more than one in five people in the US have accounted for coronavirus deaths out of the world, according to the Washington Post.

“The American people have witnessed what is the greatest failure of any presidential administration in the history of our country,” says Harris. She also began to personally say that President Trump had kept the deadly and lethal virus out of the American people’s knowledge. Pence shook his head as a result and continued to show empathy for those lives lost to COVID-19, without truly commenting on Harris’s claim.

In rebuttal, Pence directed the conversation to the fact that the American people can decide how they want to approach the virus on an individual level.

“President Trump and I trust the American people to make the best choices for themselves about their health,” said Pence. Harris did not think this is how the situation should have been handled, for caring for the health of the people comes first and that is a president’s job.

Throughout the debate, Pence had interrupted Harris multiple times, and it also took him a lot of time to get to his key points across. While Harris seemed to bang out emotions about the deaths due to COVID-19 and how important it is to be truthful.

Taking a look back at the presidential debate between Trump and Biden in September, points weren’t clearly made between the candidates, but this debate is just what the people needed to hear in order to vote.