Most Haunted Places in York 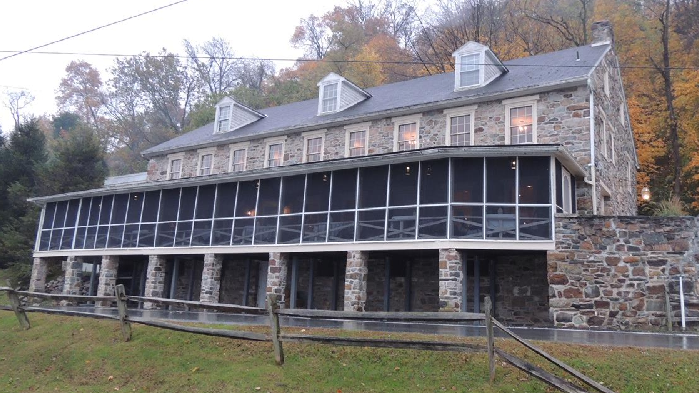 Rock Commercial Real Estate photographs York County’s Accomac Inn in 2018 right after recent closing after the owner put it up for sale, and is currently listed at 530 thousand dollars. Photo by Rock Commercial.

On Nov. 29, 1928 Nelson Rehmeyer was brutally murdered by three men who believed Rehmeyer had put a spell on them and their families. In search of one of his spellbooks, the three men broke into Rehmeyer’s home, but could not find what they were looking for.

When suddenly face-to-face with the homeowner, the three men took Rehmeyer, tied him up, beat him to death and tried to set his body on fire. The tragedy that took place this night grew in popularity due to the uncommon factor of witchcraft, which ultimately led to the death of Rehmeyer.

What is now known as Rehmeyer’s Hollow, or Hex Hollow, is said to be one of the most haunted places in the York County area. Rumor has it that if you are in the area you can see faces of people who died there. It is said cars tend to stall out too.

This story has recently made a comeback in the past decade or two because of the tours and the hayride that once took place. Rickie Ebaugh, Rehymeyer’s great-grandson, ran these tours to inform people about the tragedy that took place that day and continues to haunt his family. Though the hayride was generally a big hit, some people were disappointed that it was not as scary as the expected, though it was advertised as an informative hayride.

When asked to speak for an interview, Ebaugh refused and said the immediate family had requested that he let them share the story directly.

Aside from Hex Hollows, the Accomac Inn also makes top ten on the list of most haunted places in York. Before being a hotel, it was once called Coyle’s Ferry. Jessica Ferri, a writer from Brooklyn who is in the process of publishing her first book called “Dearly Departed”, has looked into this as well and found that  Johnny Coyle worked and fell in love with Emily Myers, who wouldn’t give him the time of day. Out of rage,  he shot and killed Myers. Coyle pleaded not guilty but after the hearings, the jury found him guilty and he was sentenced to be hung.

Although Coyle’s Ferry has long since been turned down and rebuilt as the Accomac Inn, Coyle still has a stone marker and is buried just off the side of the parking lot. It is said that both Coyle and Myers still haunt this place. What makes this location so interesting is that the Accomac Inn is open as a restaurant.

Unfortunately, restrictions due to COVID-19 have forced the restaurant to shut down. Many visitors to the restaurant have reported that they feel as if they are being watched.

One former waitress claimed to have multiple interactions which she believed to be from the ghost of Myers. One night while she was closing, she heard loud banging, flashing lights and the intercom going off and she assured reporters she was alone.

Aside from the tragedies that have taken place in these haunted places in York, and with Halloween creeping up on us, it is always exciting to go see for yourself if the rumors are true.