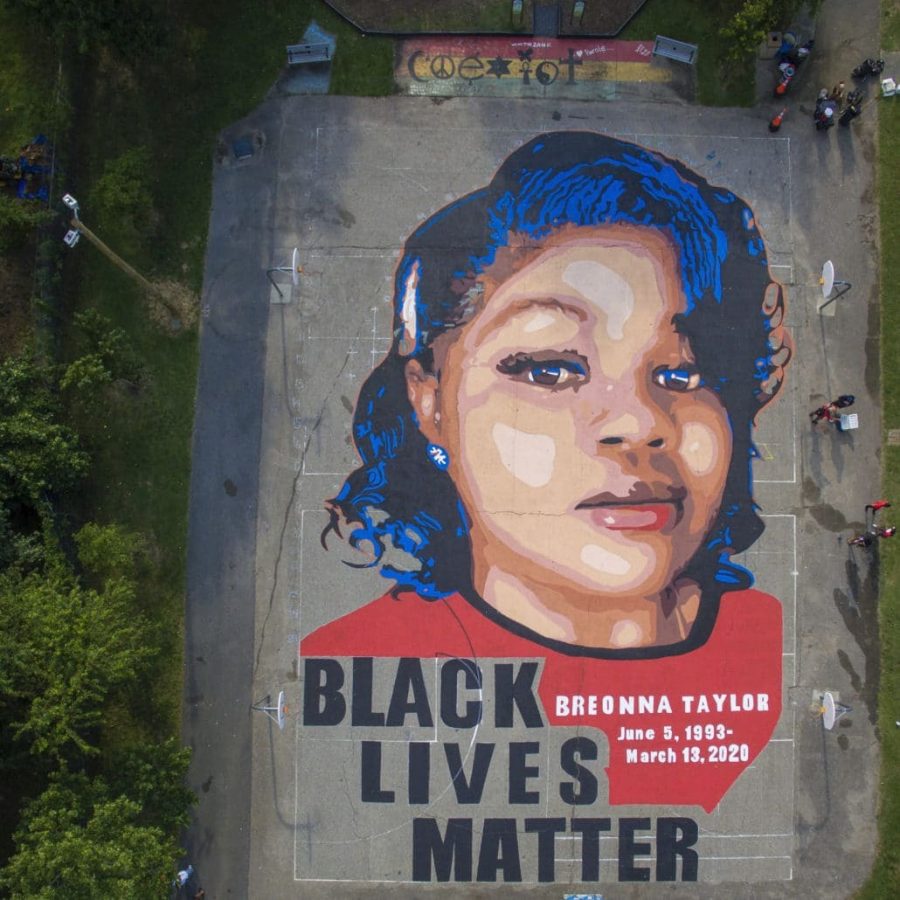 A mural of Breonna Taylor is displayed in Annapolis, Maryland. Photo by Jim Lo Scalzo

March 13, 2020, the day Breonna Taylor died, paved the way for the influential protesters of the Black Lives Matter (BLM) movement to initiate change. Protests began in late May and have sparked non-violent uprisings to life many other protests internationally on behalf of Taylor, George Floyd and Elijah McClain (both have also died during police action).

Diving deeper into the Breonna Taylor case, it is evident that there are still many questions unanswered. The majority of the information coming from neighbors of Taylor, the officers involved and Kenneth Walker (Taylor’s boyfriend at the time) still leave the case a mystery. Jonathan Mattingly, Brett Hankison and Myles Cosgrove of the Louisville Metro Police Department had arrived at Taylor’s house March 13 in Louisville, Ky. sometime after midnight. They had arrived under a narcotics warrant to search her home, while Taylor and Walker were in bed. In what seemed to be just minutes, shots were fired. Audio recordings were released Friday, Sep. 26 to the public, which included testimony and interviews from the last month.

Walker said, “She’s yelling at the top of her lungs, and I am too at this point. No answer. No response. No nothing.”

On the contrary, Detective Michael Nobles (detective on the Taylor case) said, “officers made so much noise that an upstairs neighbor came outside.”

Louisville police, Lt. Hoover said that even though the officers had a no-knock warrant they agreed to “give them a chance to answer the door.” Making the explanation of the case rockier, Hoover said the officers introduced themselves outside the door and knocked three times, as stated by the Washington Post.

Actions within the case have multiple answers as well. Walker told police he grabbed a gun when he noticed the people at the door weren’t willing to introduce themselves. Walker shot Mattingly in the leg once he leaned in the door. His reason for doing so is he believed there were intruders in the house.

Mattingly had fallen and he began shooting. He specifically described that he only saw a “shadowy mass” and at that instant, in Taylor’s home he didn’t recall shooting 16 times. According to the Washington Post, it is now proven that those bullets match his gun out of the 32 bullets shot in Taylor’s home. The officers unleashed a 32-round hail of return fire that killed Taylor.

Under interviews with the officers, officer Hankison, who has since been fired, said he, “saw flashes from a gun coming from inside the apartment and began shooting.”

“What I saw at the time was a figure in a shooting stance, and it looked as if he was holding, he or she was holding, an AR-15 or a long gun, a rifle,” Hankison further added.

It is now proven that Walker had used a handgun.

While issues have been unfolded in Taylor’s case, it seems the details of the story are still very unclear.

In an interview from the Courier-journal in Louisville, Ky. they spoke to Louisville Metro Police Chief Steve Conrad.

“I’ve been around long enough to see the process of people sharing a story,” he said. “And by the time it gets from point A to point Z it is very different and often nowhere near what actually happened.”

Conrad was fired in June, due to the failure of not activating body cameras on officers during duty in the Taylor case, and David McAtee, the owner of a Louisville barbecue restaurant, was shot and killed (also shot and killed by law enforcement officers).

Despite the mixed story, Louisville Mayor Greg Fischer announced “the city has agreed to pay $12 million to the family of Breonna Taylor in a wrongful death lawsuit,” according to NPR.

On Wednesday, Oct. 7, the office of Louisville Mayor Greg Fischer released pages from the Police Department’s public files on the investigation into the fatal shooting of Taylor.

The files “contain information and images that are traumatic and painful,” Fischer said.

Unfortunately, nothing; not even money can make up for the fact that Taylor’s family lost a beautiful young woman to a deadly event.