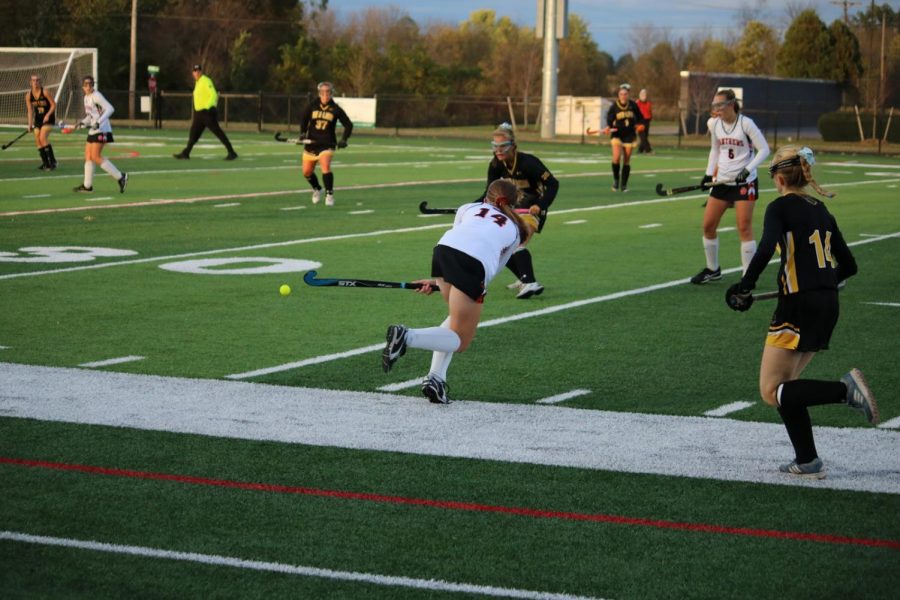 Even as the season starts to change from sunshine and warm weather to windy and chilly mornings, one thing that won’t change is the passion and excitement that our students, athletes, and staff have for this season’s fall sports.

“Our defenders are great, and our forwards are outstanding.” Bevivino otherwise stated. Overall, Bevivino believes that the team will do well and is confident in their abilities.

This season’s Girls’ Soccer team has been on a 6-0 winning streak. All these wins are not only a product of hard work alone but also a close relationship between the players on the team.

“We all get along really well together,” senior Abigail Grigg stated. This year, Grigg feels confident because not only has she been made a captain, she also has a good team to support her as much as she supports them.

Central’s Fall 2020 Golf team has also been doing good recently, securing a win in their division. Furthermore, they’ve only lost one game this season. “Personally, I’m doing pretty bad,” senior Jun Lee chuckled, “As long as the team wins, that’s all I care about.”

Lee said, “The team is ready to do whatever it takes to win and is ready to give their all at practice.”

The Girls’ Tennis team has been doing “pretty good”, according to sophomore Anna Grechaniuk. Unfortunately, safety guidelines emphasize the need to socially distance, preventing them from high-fiving each other. “It’s a little weird, but we’re trying our best,” said Grechaniuk.

The tennis team’s last game for the season was on October 5th, ending with a team record of 5-3. One of the hardest teams they went up against was Southwestern, which consequently was their first loss of the season.

The Girls’ Water Polo team started off their season with a record of 0-3, but the season isn’t over yet. “We’ve been playing some tough teams, but we’ve also been having a lot better practices,” junior Ashley Berman stated.

According to Berman, the outlook for the rest of the season is nothing but positive and hopeful.

Pass, set, hit. These are the trademarks of a game with extremely explosive movement. With a 3-1 record for varsity and a 4-0 record for JV, this year’s Girls’ Volleyball has been doing quite well.

“It’s just about putting all the pieces together and having more confidence,” said Davies.

Davies feels that this will be another amazing season as the team shoots for making it further into playoffs this year.

Currently, the Football team’s record stands at 3-0, but what is even more mind-blowing is the fact that only one team has been able to score against them.

“I feel like we can do a lot of good and win a lot of games,” sophomore Dayton Bagwell said. As long as the team stays focused and keeps aiming for the best, Bagwell hopes to win Districts and make the Playoffs.

Senior Julianna Mariano has reported that the Field Hockey team has been doing well so far, with a 3-1 record. Even with strict rules and regulations regarding the pandemic, the team chemistry still resembles that of a big, happy family.  “It’s taking a bit to find our unity, but it’s getting there,” Mariano said.

Overall, Mariano feels positive about the outlook for this season. “We have a lot of talent and a lot of connection between us.” Mariano stated.

With a Varsity record of 1-3 and a JV record of 2-3, the Water Polo team still has a whole season left ahead of them.

“We’re getting better as a team. We look out for each other and we make sure everybody is doing a-okay,” sophomore Jason Eckert stated. There was a brief period of time where the team had to stop practicing due to the fact that one coach had contracted COVID-19. Fortunately, they are headed into the pool room once again. Eckert claims that the coaches have put them into a good spot as a team and helped them substantially.

Sophomore Thomas Romig has been part of the Central’s Cross Country team since he was in middle school, and with a record of 1-1, he thinks that the team is doing pretty well.

“We still have a good pack going,” Romig chuckled, referring to the top runners on the team. When speaking about the runners, Romig compares them to a pack of wolves, in a sense that they run together and stick together in hopes of having lower times. One of their biggest accomplishments this season is achieving “a tight pack.”