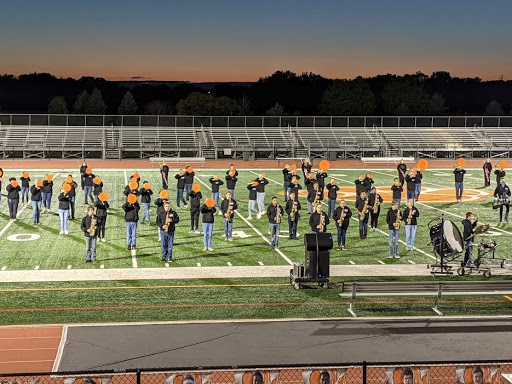 Brass players are required to use a bell-cover while performing. Photo by Dave Hazelton.

Upon first hearing the music coming from the Central York High School parking lot on a dark Wednesday night, it might seem that the Panther Marching Band is operating as usual. After closer inspection though, you’ll notice an abnormality for fall rehearsals – masked students spaced six feet apart in their formations.

Like all other school-affiliated sports teams and organizations, the marching band is dealing with its own set of guidelines that members must adhere to during the COVID-19 pandemic.

“I’ve adapted to the restrictions now, but obviously, it’s not what anybody wants it to be,” said Madisyn Ripley, a second-year color guard member.

One of the biggest changes for Panther Marching Band members was the adjustment to playing a live-streamed performance. This is the method they use to display their “Kings and Queens” show, although a recent policy adjustment has permitted a few family members for each participating student to attend. All parades and showcases have been canceled.

“If we don’t ever get to perform in front of a live audience, the season won’t feel complete,” Ripley said.

Many members emphasized that the limited number of fans has resulted in a noticeable lack of spirit. Still, the musicians maintain that they must be allowed to play in the stands to support the football team.

“We create a different energy, and while we are there for the spectators, we are mainly there for the players and to cheer them on,” Claire Tison, a first-year marching band member, said.

The group has also faced other changes, including the fact that they now perform in a mandated show sweatshirt and blue jeans instead of the usual black and orange uniform.

Out of all the various adjustments though, the difference to the social aspect is the most concerning for marching band participants.

“We are a bit more restricted this year and so we don’t get things like bus rides and longer Friday nights, so that part has definitely impacted the social dynamic,” Tison said.

Many students are simply thankful to have the opportunity to play at all and are tolerant of the regulations.

“It makes me feel safe and like people care about our health and want to make it feel as normal as possible,” said freshman Sophie Rower.

Overall, marching band members have decided that the best way to move forward is to remain upbeat about the situation.

The circumstances aren’t so bad. After all, there is still music under the lights.