Trump and Biden collide one last time on debate stage 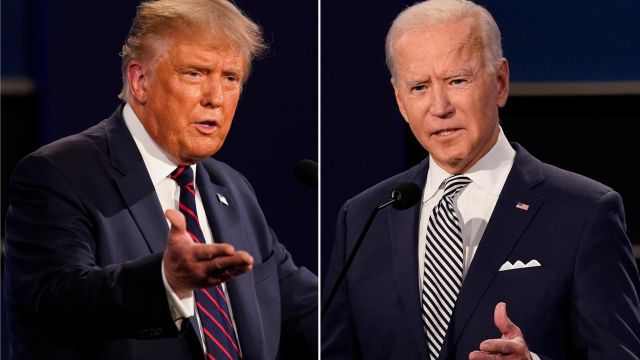 President Trump and Joe Biden battled one final team in the 2020 presidential election in Tennessee. Photo from Newsday.

Sam Woloson, Editor-in-Chief of The Prowler

The final presidential debate between incumbent President Donald Trump and former vice president Joe Biden took place on Oct. 22 at Belmont University in Nashville, Tn. The debate was moderated by Kristen Welker of NBC News.
Format-wise, the debate featured the use of mutable microphones. These were employed during each candidate’s uninterrupted two minutes per subject to prevent any unruliness like last time. The microphones would then be unmuted for subsequent discussion. This made them much less impactful than expected.
The six topics brought up during the night were: fighting COVID-19, American families, race in America, climate change, national security and leadership. Welker was praised for handling the debate well and doing a good job of allowing each candidate to speak uninterrupted while also holding them to their time constraints and segwaying into the next topics.
Unlike the first debate between the two, Thursday’s debate was decidedly more civil. There still were moments of disruption, which included both candidates and Welker shouting over each other, grappling for an opportunity to speak. Yet overall, it actually felt like a debate. Which really is music to the collective ears of the American people, particularly in one of the most polarizing presidential elections ever. Finally an opportunity for the two to talk about the issues, just weeks before the polls close.
So what was said?
On COVID-19, Trump promised a vaccine in just a few weeks while also downplaying the scale of the virus. He focused less on his plan moving forward – or lack thereof – and instead talked about how his administration has limited the damages caused by the virus. He cited early estimates of possible death tolls and explained how the true toll is much less. Biden refuted this by insisting that Trump still seriously downplayed the virus and could have saved countless more lives if he had been more alert to the issue.
Another big hitting topic was the ever-present issue of racism. When confronted with allegations of being racist and his well-publicized stance against the BLM movement, Trump offered this: “I am the least racist person in this room.” He went on to say that he has done more for African Americans since maybe

President Abraham Lincoln. This was a huge bait for Biden, who offered a quick rebuttal to attack Trump’s record, referencing some of his words to Mexicans and his policy against Muslim people.
Biden also made some big statements, including stating his desire to transition from the oil industry. He went on to say that he wanted to use cleaner forms of energy due to fears of pollution. Trump appealed to swing states or just outright red states in an effort to show just how ridiculous he felt the claim was.
Overall still not a lot changed. All of the debates, both with Trump and Biden and also the vice presidents, have really been inconclusive. There’s not a lot that would really change any person’s mind or do much to sway an undecided voter. Biden is entering with a lead, but so was Hillary Clinton in 2016. It’s anybody’s game, with the stakes being the next four years of this country.
Delete Image
Align Left
Align Center
Align Right
Align Left
Align Center
Delete Heading