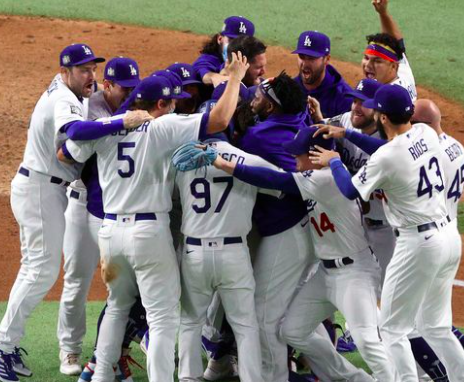 The Los Angeles Dodgers celebrate after they win the World Series. By Sean M. Haffey.

The Los Angeles Dodgers road to victory wasn’t easy, and the Tampa Bay Rays gave them a run for their money, but in the end, the Rays were no match for the National League Champions, the Dodgers

In an 8-3 win over the Rays, the Dodgers took game one. Clayton Kershaw threw an absolute gem. He struck out eight and only allowed one run over six innings. The offense was led by Mookie Betts,  who had two stolen bases and two hits. The Rays looked outmatched the whole game. Other contributing performances from the Dodgers came from Cody Bellinger and Corey Seager.

“Kershaw was dealing,” Rays manager Kevin Cash said. “You see why he’s going to the Hall of Fame one day.”

The Rays took game two with a 6-4 win. Blake Snell, kept the Dodgers quiet, allowing two runs in four and two-thirds innings. Other noticeable performances came from Brandon Lowe. Dodgers manager Dave Roberts looked at the game as a positive.

In game three, the Dodgers came ready to play winning 6-2 with a stunning performance by Walker Buehler. Buehler allowed three hits, one run, and walked one while striking out ten. The Dodgers scored five of their runs with two outs in the fourth. Overall, the Dodgers kept the Rays quiet.

“He’s in some really elite company, and I’m just happy

Game four ended in disappointment for Los Angeles as two errors caused the Dodgers to lose in a walk-off. Brett Phillip’s base hit in the ninth inning gave the Rays an 8-7 win. Other remarkable performances came from Randy Arozarena and Kevin Kiermaier who both scored on Phillip’s base hit.

“About 40 people that were beside themselves with excitement and all wondering what in the heck just happened,” said manager Cash on the game four walk-off. Despite the setback, the Dodgers were ready in game five

Despite the setback, the Dodgers were ready in game five. Kershaw on

ce again throws a gem in a 4-2 win. Max Muncy and Joe Pederson both hit home runs, and Corey Seager continued to show why he should be the World Series MVP. The Dodgers offense was alive, and the Rays just kept coming up short. The win brought the Dodgers within one game of winning the World Series.

The most important game for the Dodgers was game six. They won game six with a score of 3-1. Game six looked to remain close with a terrific outing by Snell who was keeping the Dodgers scoreless through six innings. In the sixth inning, Snell was taken out by manager Cash, and the Dodgers started to hit. This ultimately led to the Dodgers winning the World Series.

Game six looked to remain close as Snell was keeping the Rays lead 1-0 in the bottom of the sixth.