Lights, camera, action! Netflix originals to binge watch while social distancing. The great outdoors, as people call it, isn’t everybody’s cup of tea. With winter approaching, these new Netflix shows might just be right up your alley. 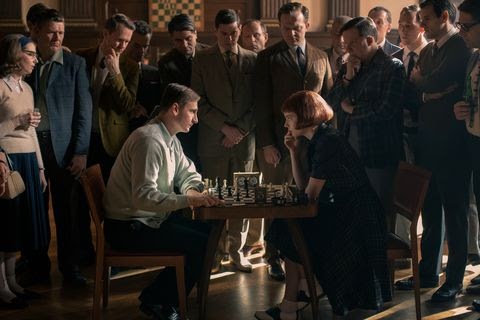 A scene from The Queen’s Gambit created by Scott Frank and Allen Scott. Submitted Photo.

Enola Holmes is a bright young girl who begins her journey in rural England. Following in the footsteps of her famous brother, Sherlock Holmes, she starts on a quest to find her mother, who suddenly disappears. Clues and notes left by her mother entices her to take a train to London, where along the way, she meets a peculiar boy who is on the run from an assassin. Holmes’ chase for her mother ends up taking a detour as she decides to help the boy outrun and outsmart his potential killer.

“I felt like they set it up really well for a second movie,” says sophomore Kaylee Gorsegner.

The Haunting of Bly Manor

This Netflix show centers around a live-in teacher, or governess, that goes by the name of Danielle Clayton. She has been hired to watch over two children, ten-year-old Miles Wingrave and his eight-year-old sister Flora. Upon arrival at Bly Manor, where she is required to stay with the children, she notices that the children and staff are quite strange, yet charming. While living in the manor, Clayton begins seeing strange visions and apparitions.

“I think it’s pretty good! The plot so far is interesting and I think the direction they’re going to take the show in is going to be interesting,” said sophomore Lucas Treviño, who is on the sixth episode of the series.

Whether or not chess is considered a sport, to young Beth Harmon, chess is a way of life.

“I liked the story line a lot because it contrasted her intelligence and drive with her alcohol and drug problems while showing the influences in her life while growing up and playing chess,” said sophomore Kya Toms, who finished the series four days after it came out.

The series follows Harmon and her journey to be the first female chess champion. Starting out as a moody, quiet, and overall average nine-year-old orphan, Harmon uncovers her talent for the game of chess. By the age of sixteen, Harmon started competing in higher level chess competitions.