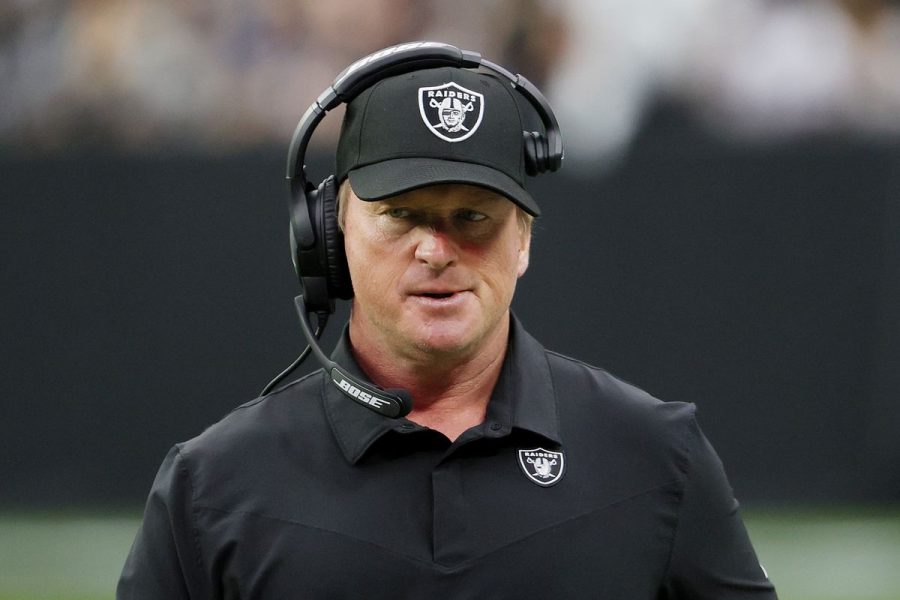 Gruden made a name for himself when he coached the 2002 Tampa Bay Buccaneers, who became Super Bowl Champions.

On Oct. 11, however, news within the sport surrounded not those on the field, but rather one individual on the sideline.

Jon Gruden, former head coach of the Oakland Raiders, resigned amid an investigation into misogynistic, homophobic and racist comments he had made in past emails.

One such email utilized a racist troupe to describe the head of the NFL Players Association, DeMaurice Smith.

“I never had a blade of racism in me,” Gruden said following the news, “I’m embarrassed by what’s out there… I certainly never wanted for it to sound that bad.”

Uncovered comments made between 2010 and 2018 indicated that Gruden had denounced many minorities associated with football. He reportedly disapproved of hiring women as referees and drafting gay players, as well as the NFL’s tolerance of protest during the national anthem.

“He’s always been a fraud to me,” Keyshawn Johnson, a former player under Gruden, said, “He’s selling you something, and you’re buying it.”

The idea that Gruden is just one part of a bigger issue of racism and intolerance within the league is common. His comments were uncovered during a workplace misconduct investigation into former president of the Washington Football Team, Bruce Allen.

“The email from Jon Gruden – and some of the reaction to it – confirms that the fight against racism, racist tropes and intolerance is not over,” Smith, the target of Gruden’s initial uncovered comments, said.

Gruden’s resignation is shining a light on inappropriate behavior stemming from people in authoritative positions, both inside and outside of the sports world.

“Make no mistake, the news is not about what is said in our private conversation, but what else is said by people who never thought they would be exposed,” Smith said.