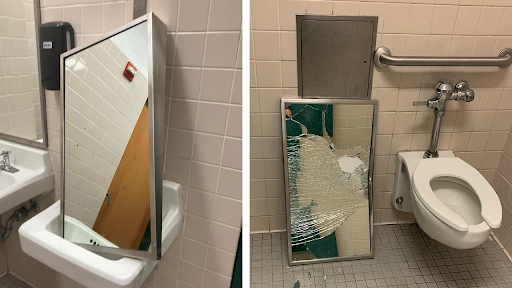 The image above is a prime example of incidents that occur across schools affected by the trend. Similar forms of vandalism have occurred within Central York High School.

Throughout the month of September, a social media trend broke out and has spread across the country. This trend is formally known as the “Devious Lick Trend” which originated from TikTok. An individual, usually a student, records themselves planning to steal an object from their school. Then, that student would record a video of what they stole or vandalized from the school. Catching the eye of the largest corporations such as Fox, CNN and ABC, the trend has the eye of everyone and some question “is it just getting started.”

“At first we did not know exactly what they were… we responded to them as normal criminal mischiefs,” stated Kennedy.

Assessing the damage in the high school, there were various soap dispensers, damaged urinals and toilets and vandalized bathrooms.

“Like I said, at first we were not aware of what it was called (referring to the title Devious Licks)” says Kennedy. However, now the school administration is well aware and has begun to take action, making announcements of what is going on, how it will be addressed and even consequences such as locked bathroom doors and higher supervision.

But the students at the high school were well aware of the name as it was originating from a popular social media. TikTok was the first sign of the Trend millions of uploaded videos portraying students vandalizing, stealing or replacing items at their local schools.

“It has not affected me personally; I’ve only ever seen videos of them, “ says Giavana Pacheco, a member of the senior class of CYHS.

“I have had difficulties at times in the bathrooms”, stated Ethan Levine, a beloved senior class member. Levine continues to go into further detail sharing that finding a bathroom not vandalized was difficult. Levine continues to say “I even had to find a different soap dispenser one day at school due to the Devious Licks TikTok trend.”

“I find it very unfortunate, it seemed like a fun idea at the time but, vandalizing the school is never a good idea,” expressed Teresa Cooksey.

To some Central York members, the trend was not an issue, but as the trend had become more viral, it has impacted more and more their daily routines.