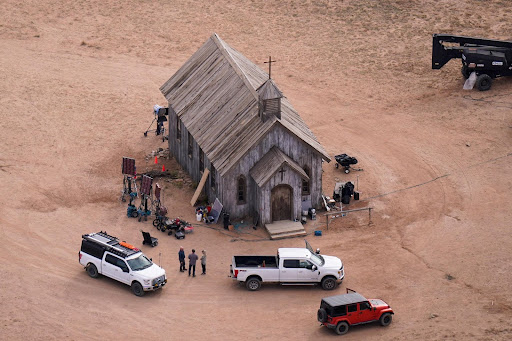 Immediately preceding the fatal shooting of Hutchins on Oct. 21, workers walked off of the “Rust” set to protest poor working conditions.

Gunfights in western films are characteristically brash and untamed. The on-set handling of prop weapons used to film such scenes is thought of to be carefully monitored, however. Such was not the case on Oct. 21, when popular actor Alec Baldwin shot and killed cinematographer Halyna Hutchins on the set of his new film “Rust” – albeit unintentionally.

According to an affidavit signed by Detective Joel Cano of the Santa Fe County sheriff’s office, the accident took place while the movie was shooting inside a church on Bonanza Creek Ranch in New Mexico.

Assistant director Dave Halls grabbed one of three prop guns that had been laid on a cart by the film’s armorer, Hannah Gutierrez-Reed, and yelled, “Cold gun,” indicating that the weapon had no live rounds in it. Halls then handed the gun to Baldwin, who was rehearsing cross-drawing the revolver when he shot Hutchins in the stomach, killing her.

“There are no words to convey my shock and sadness,” said Baldwin following the accident, “She was my friend. We were a very, very well-oiled crew shooting a film together, and then this horrible event happened.”

While the filmmaking community grapples with the loss of Hutchins, who was working on her first A-list film with “Rust,” the focus of many is on rallying for safer workplaces so that another similar incident doesn’t happen.

Director and writer Bandar Albuliwi has created a petition for “Halyna’s Law,” legislation that would ban live ammunition and real guns on film and television sets.

Creating statewide legislation for the same purpose has also been proposed by many leaders. The trouble comes in ensuring that rules line up across all states, so that production companies don’t simply move their sets to more convenient locations. Despite the hassles, numerous lawmakers are ready to enforce a change.

“The state of New Mexico will take immediate action… to ensure the safety of all personnel on all film and television sets here in our state,” said Gov. Michelle Lujan Grisham.

Baldwin himself is calling for stricter safety measures as well.

“Every film/TV set that uses guns, fake or otherwise, should have a police officer on set, hired by the production, to specifically monitor weapons safety,” he said.

Hutchins’ death was not the first accidental on-set shooting, either. Bruce Lee’s son Brandon was killed in 1993 when a fellow actor fired a gun at him. The weapon was intended to be loaded with blanks but contained bullets.

Hopefully the “Rust” incident will be the one to catalyze greater protections of workers on film sets.