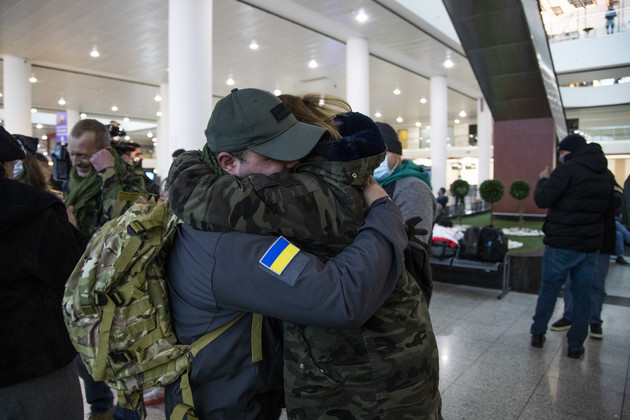 An American volunteer says goodbye to his family at Tbilisi International Airport before leaving to join the fight against Russia.

In the last month, Russia has unleashed a full-scale invasion of Ukraine. Vladimir Putin, the President of Russia, began the invasion Feb. 24. His apparent goal in doing so is to capture the capital of Ukraine, Kyiv, destroy Ukraine’s democratic government and reverse the separation of Ukraine from Russia that took place after the disbanding of the Soviet Union.

Russia’s plan for capture originally involved planning for attacks on Ukraine’s infrastructures. Over the last five weeks, that plan has evolved into attacks on civilians. Since the start of the war, over two million Ukraine citizens have fled to neighboring countries leaving Ukraine with a weakened military presence.

As a result, Ukrainian President Volodymyr Zelensky has issued an invitation to foreigners to join the fight against Russia.

“Anyone who wants to join the defense of Ukraine, Europe and the world can come and fight side by side with the Ukrainians against the Russian war criminals,” said President Zelenskyy, according to the Washington Post.

This call to action has been heard by many across the world. In total 20,000 volunteers have stepped up according to Robert Zaretsky of Foreign Policy news. Those individuals include people with military, law or medical experience who feel that they have much to offer the military. Ukraine has made it clear that they are only accepting volunteers that are experienced because of the time-sensitive nature of the issue.

Many of those individuals are veterans who know what it’s like to need backup in times of war and foreigners who couldn’t help but be moved by Ukraine’s plead for help.

“I feel like it’s the right thing to do, and that’s the best way to get your passions, in life. If it’s a passion, it’s a passion that I’m willing to die for,” said Tristan Lombardo, a 22-year-old from Evansville, Illinois.

Volunteers from over 52 countries are currently represented in the new volunteer unit called the International Brigade of the Territorial Defense of Ukraine. The specifics about those volunteers and their native homelands have been kept quiet due to the possible backlash for citizens of countries who are forbidden to join foreign militaries.

To join the fight, volunteers had to go through an extensive application process with the Foreign Legion of Territorial Defense of Ukraine on top of providing their own materials and transportation to Ukraine. Those individuals who make it all the way to Ukraine are considered legionnaires, enlistees that fight on a government’s behalf with the legal status of citizen soldiers.

Across the world, people who are following the war closely are commending the foreigners who are sacrificing their time and even their lives to fight for a nation stranger to them. Their sense of duty and honor in a time of trepidation is one that will go down in history.