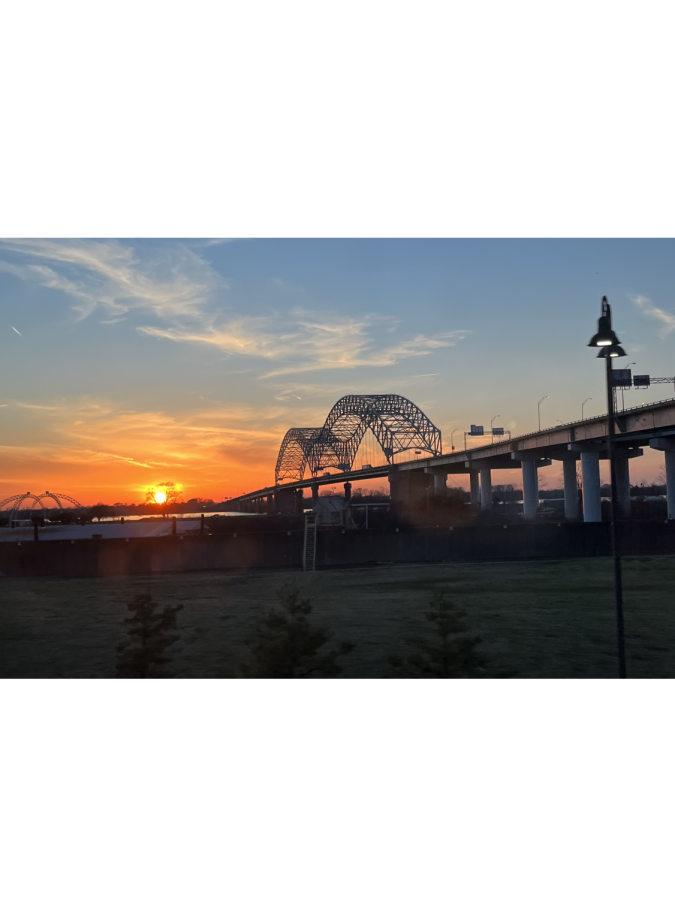 Sunsets were pleasant things to see on the long and arduous bus rides.

Taking a tour of Tennessee

The music department recently took a five-day trip to the cities of Nashville and Memphis. Both cities, rich in their musical history welcomed CYHS with open arms with many different activities for students to explore.

“The bus rides were fun, but it was rough trying to sleep at the same time,” said senior Ashlynn Godfrey.

After arriving in Nashville around 9 a.m., the first stop was the African American Music Museum. This stop featured all kinds of different rooms and exhibits. Each one focused on a different style of music, including jazz, gospel and country.

“There were plenty of exhibits. If there was a genre you didn’t like, you could easily move on and find something you do like,” said freshman Darius Holman.

Once through the museum, the group hit their first shopping spree; the stunning Honky Tonk row excited students in downtown Nashville. Many shops and restaurants filled students with vigor after a long trip.

“The different kinds of food made it very lively,” said senior Simon Fuller.

The Country Music Hall of Fame was the next stop on the list and it featured many of the greatest country musicians of all time such as Willie Nelson and Bill Anderson. Glamorous outfits stood behind glass cases and records hung from the walls, displaying how impactful these artists were.

“Getting to see the attire of country artists, new and old, really put things in perspective,” said senior Alicia Le.

The last stop of the first day was an orchestral symphony in the heart of Nashville. The music played was similar to pieces the CYHS orchestra and band have played over the years but held its own originality to keep students on the edge of their seats.

“It was so stunning seeing professionals work together to create such immense and euphoric music,” said junior Zachary Smith.

With the first proper sleep since leaving Pennsylvania, the music department was ready for their next upcoming day. The group set foot in the Grand Ole Opry, a country music stage and theater. They saw the behind-the-scenes stuff like dressing rooms, as well as the stage itself. In the center of the stage was a small wooden circle. This was from a previous Grand Ole Opry building and holds lots of significance. Students were able to set foot here just like many other country stars.

“Stepping onto the stage and into the cherished circle was surreal. It truly felt like a sacred and beloved space,” said senior Olivia Pituch.

In the afternoon, the music department experienced the first of what they came to Nashville for. Loading crew unloaded instruments and set up chairs. Students put together their instruments and prepared for their first performance. A crowd formed and Central York showed Nashville what it could do.

“I liked a lot of the music we played, and it fit the places where we played them,” said Godfrey.

Some students consider Saturday evening to be the highlight of the trip. The group went to a Saturday night show at the Grand Ole Opry. Lights and music were loud, and the signs read, “ON AIR” along the walls. By far the most surprising part of the show was how country music artist Jamey Johnson was inducted to become a member of the Grand Ole Opry. This only happens about once every fifty shows, so it was a thrill to experience.

“It was a blast seeing my cousin, as well as other musicians, perform,” said Holman.

Sunday was fairly tame compared to the rest of the trip. It was well warranted though, as the music department said farewell to Nashville and hello to Memphis. Once arriving, the first stop was the National Civil Rights Museum. Here, students experienced the legacy of the Civil Rights Movement and how the world was shaped and is shaped today.

“It [the museum] was an incredibly educational and impactful tribute to everyone involved in the civil rights movement,” said Pituch.

After some free time at a hotel, students made the jump from land to sea as they took a musical cruise on the Mississippi River. Loud music played through speakers as students danced the night away on the dance floor. While not an event for all, it certainly was a night to remember.

“The scenery was beautiful and I’m so glad I got to spend the night dancing! I wish it would have lasted longer though,” said Smith.

Monday brought a bittersweet end to the trip as a whole. The majority of the day was spent in Graceland, home of Elvis Presley. On top of performing, students had a blast exploring the home of the king of rock and roll and the shops and villas surrounding it.

“I liked the atmosphere of it. The fact we got to see where Elvis would be through different times of day was very cool,” said junior Parker Lam.

To finish off the trip, students visited the Rock and Soul Museum in downtown Memphis. While a little shorter than other museums, it made up for it with audio readings of exhibits and giving students the ability to listen to some of the music that shaped the rock and soul genres of music as a whole.

“Compared to the other two music museums, the Rock and Soul Museum captured genres of music that were not as popular in the area,” said senior Ryan Smith.

All in all, students considered this trip a blast. From the stunning sights and visuals to the plethora of activities, it is safe to say that every individual student had at least something they liked about the trip.