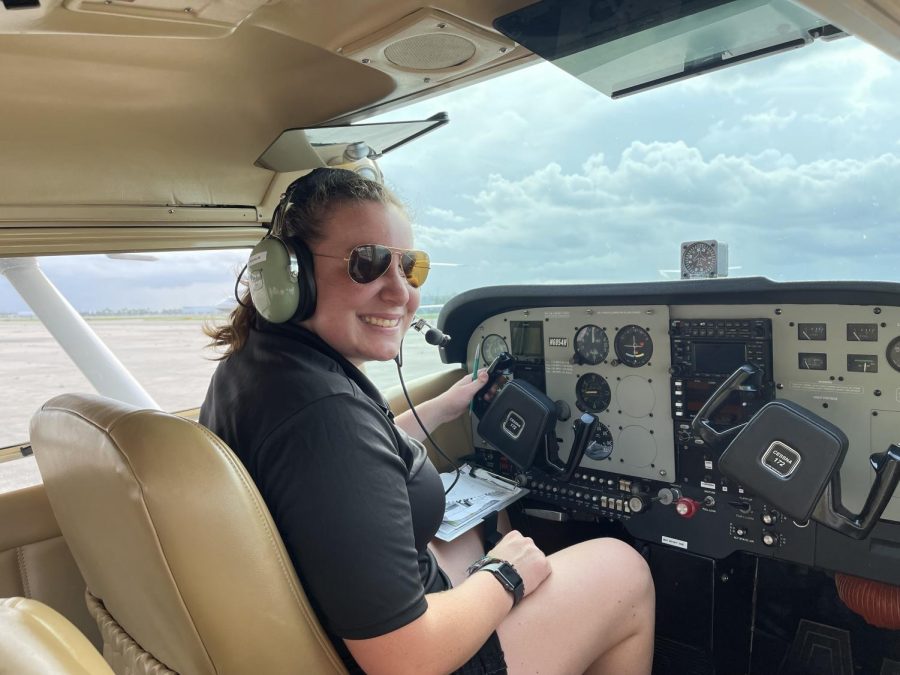 Sarah Miller sitting in the cockpit of a Cessna-172m plane.

Central York senior Sarah Miller worked hard to gain her pilot license this summer. She is in JROTC and noticed there was a scholarship for the “Flight Academy” and so she applied. Miller got accepted for the program and began the process of getting in. She had to do a physical fitness test, Air Force Officer Qualifying Test (AFOQT) and submit a resume.

Her favorite place she flew to was Marco Island during a sunset because, “it was gorgeous”, and that’s when she knew she wanted to continue flying.

When Miller first started the program she flew with an instructor for 30 hours before flying alone. This time allowed her to get comfortable for when she would travel solo.

Miller reflected on her first solo flight where she felt, “very confident and knew what she was doing.” She’s now certified to fly a single-engine land airplane with passengers.

In Florida, the weather often changes quickly and can be unpredictable. Miller shared a story of one she came in contact with.

“When I was flying to Pahokee, I landed with nice weather. And then when I was going to leave there was a thunderstorm over Opalocka, so I couldn’t land. I flew in circles for about two hours and talked to the Miami Approach. I then safely landed three hours later when the storm passed,” Miller stated.

During Miller’s flights, she needed to use a headset, checklist and Ipad app called Foreflight for weather, traffic, runways, landing and takeoff distances. She would strap the iPad to her left leg so information was accessible and at her fingertips.

Looking into her future she has some colleges in mind such as, Embry-Riddle, Western Michigan and the University of North Dakota. She hopes to one day be Airline Pilot and fly an F-16 Air Force plane.