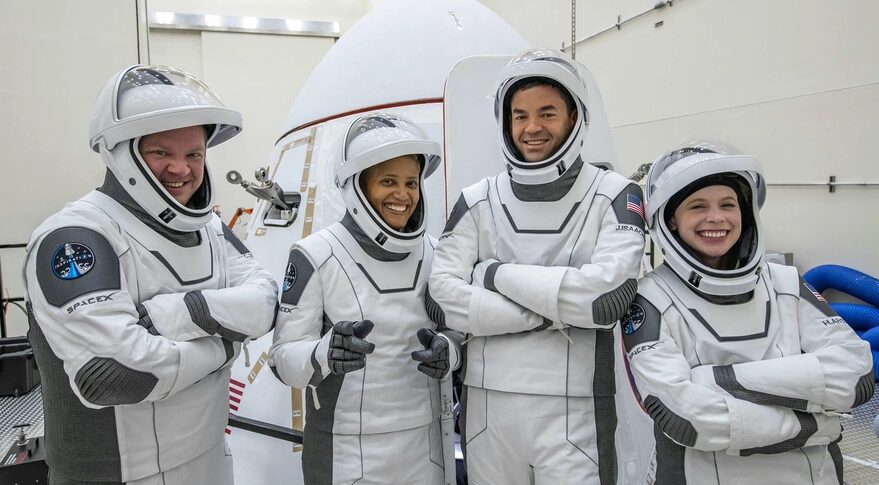 Get to know the Inspiration4 crew

On Sept. 18, 2021, SpaceX’s Dragon shuttle returned to Earth with a splash off the coast of Florida. It had just finished orbiting the planet at about 357 miles above the Earth’s surface, higher than the International Space Station. Upon return, a recovery vessel went to pick up the crew of the shuttle, known as Inspiration4.

The team stayed in space for three days, doing many remarkable tests and studies, while also having a little fun. The main study was what kind of effects would take place during prolonged space flights. The high altitude allowed the crew to track down data easily compared to the altitude of the International Space Station.

“It [the altitude] has a higher radiation profile than what would be observed at the space station. The greater the understanding we can have on that, the better planning we can make for future long-duration missions, like going to Mars,” said Jared Isaacman, captain of Inspiration4.

Isaascman was the captain of the Dragon vessel. His position was well earned, as he is a leader in many things outside of space travel. Isaacman is the founder and chief executive officer of Shift4 Payments, which is an online payments company. His leadership led him to become a billionaire and piqued his interest in SpaceX.

Another reason the trip to space was planned was to raise money for St. Jude Children’s Research Hospital. The planned goal was 200 million dollars and the team crushed it by achieving 210 million dollars in just a matter of days. It helped that one of the members of Inspiration4 was a physician at St. Jude named Hayley Arceneaux.

Arceneaux is not only the youngest person to ever go to space at the age of 29, but she is also the only person with a prosthetic implant to go to space. She planned on using her time in space to video conference with the media as well as her patients at St. Jude Children’s Research Hospital.

The other two members were chosen by a competition held back in February of 2021. The competition had seats for “prosperity” and “generosity” themes. The winner of the “prosperity” theme was Sian Proctor, a geoscientist and an artist. She explained her desire to fly to space in a submission video sent to SpaceX.

“I have this opportunity to not only accomplish my dream but also inspire the next generation of women of color and girls of color, and really get them to think about reaching for the stars,” said Proctor.

The final crew member, Chris Sembroski, an aeronautics engineer and an air force veteran, filled the “generosity” seat. Sembroski did not win the spot himself, but a friend of his who did win did not want the spot offered it to Sembroski.

“Joining the Inspiration4 crew and its mission of support for St. Jude is truly a dream come true,” said Sembroski.

The Inspiration4 crew was sad to say goodbye to outer space, but they were even more excited for a St. Jude charity event that is upcoming upon their arrival on Earth. It seems in space or not, the crew can brave any challenge before them!