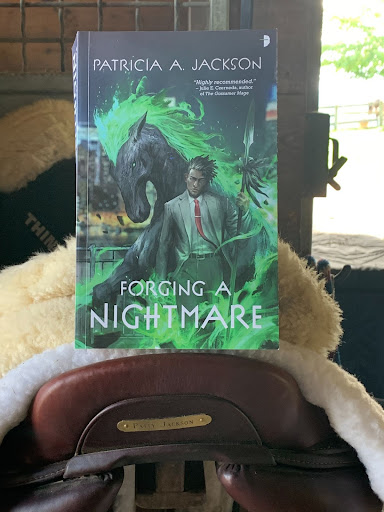 Jackson took inspiration from her love of horses into a character, Anaba Raines, a nightmare (warhorse built for a fallen angel).

Publishing a book is a dream of many aspiring writers. The question is: do they truly have the perseverance to complete the publishing process? Traditionally, publishing a book takes years to finish and is a lengthy struggle.

Patricia Jackson, English and creative writing teacher at Central York High School (CYSD), is waiting for the arrival of her first published book, “Forging A Nightmare,” an urban fantasy, which will be on shelves in November.

It took her three years to publish, and she was rejected 88 times by agents.

“People think it’s write it, and I’m done,” she said. The writing process looks different for everyone, and it’s a process that can’t be rushed.

Jackson has been writing since she was eight years old.

“My inner eight-year-old is the pilot of our reality. I don’t leave reality without her. I’m Chewbacca and she’s Han Solo,” said Jackson.

She explains that while some may say she’s crazy for keeping her child-like side alive, she never intends to grow up. Seeing the world through the innocence of a child is crucial. Closing doors to different opportunities won’t help; that’s how the inner eight-year-old controls her inspiration and looks at the world from a different perspective.

Writers have their own way of beginning a story, but Jackson doesn’t outline, she jumps right into writing.

Rough drafts are up to her expectation once she’s read it over many times, ran it through an online book editor, had her iPad read it aloud to her and finally read it herself. When a thought comes to mind about an intense action scene or character development, Jackson plasters her thoughts on index cards on her iPad.

She feels the hardest part of publishing is “going through all the hoops the industry puts you through.” Instances when Jackson felt her work was done, she had an agent state that her rough draft needed 30,000 fewer words.

“Editing is like puzzles. I enjoy that, but fitting the puzzle for other people is difficult and daunting,” she stated.

Jackson encourages aspiring writers to not rush the process. “[Having] patience and persistence” is key to being successful.

She additionally explains that there is a certain way writers should take their criticism. Depending on who is giving the criticism, it may not be worth reading into. There is also valuable criticism that can tell a writer something they hadn’t known before. In the industry, agents often praise work and then also give some pointers to improve parts of a novel.

Jackson often tells other writers and kids in her creative writing class, “you’re no longer Dorothy, ‘oohed’ and ‘aahed’ by what’s going on. You’re the wizard.”

Being the wizard means you’re attentive and whimsical.

Often, “you’ve forgotten to be like Dorothy,” she stated. Dorothy’s curiosity never dies, meaning, writers should let themselves be curious and more open-minded. There is no shame in asking for help and taking in feedback, that’s what makes a writer stronger.

Even though Jackson published her first book, she’s now writing another book in the same genre.

She “wanted to go to the top and [is] still working there.” There is an unmeasurable amount of improvements and achievements writers can make through a lifetime and Jackson isn’t planning on stopping any time soon.