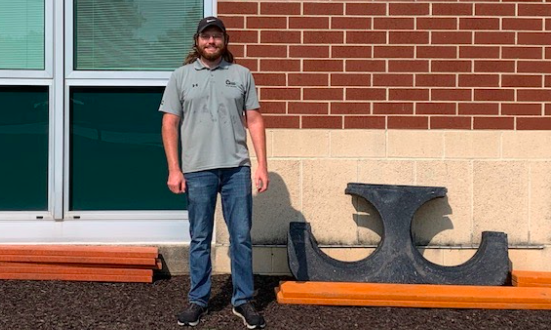 From caps to picnic tables

Over the past few years in Central York High School (CYHS), the Earth Savers club has accomplished many goals such as reaching out to companies for support, raising funds in environmentally friendly ways and setting up three custom-made benches around the school. Just recently, however, the Earth Savers have achieved their biggest milestone yet; two picnic tables that sit outside the 500-wing at CYHS.

The two picnic tables began their journey at the high school as plastic bottle lids. Companies such as Leg Up Farms have partnered with the Earth Savers, sending them bottle caps from plastic water bottles. These caps then go to the members of the club who work diligently to get them ready to turn into usable furniture.

“Our members work hard to get the plastic lids as clean as possible,” said Elijah Kibler, vice president of the Earth Savers Club.

Once the lids are clean, they must be weighed and packaged. The caps are placed in either boxes or trash bags and weighed. Once collected, cleaned and bagged, club members store nearly 10 bags that weigh up to 500 lbs.

While half the club works with plastic lids, the other half is focused on drumming up support and funds for the club. The benches and picnic tables are not cheap and the help of generous grants and donations from companies help the Earth Savers tremendously.

“The biggest fundraiser we have is throwing the yard sale,” said Earth Saver’s Advisor Alison Heiser.

Once both requirements are met, the club has another mountain to climb. How would the club transport the caps from York, Pa. to Evansville, Ind. where the benches are made?

“Mr. [Scott] Gentzler reached out to me. He was interested in the club and said he would help out in any way he could!” said Heiser.

Gentzler is the engineering manager of Graham Packaging, a company the manufactures plastic bottles. Gentzler and his team contacted the Earth Savers looking to help however they could.

“I noticed Leg Up farms was collecting plastic,” said Nancy Wise, a lab technician at Graham Packaging, “I did some research and found they did it for this club.”

Gentzler’s team offered to pay for and ship the bottle caps out to Indiana to Green Tree Plastics, the company that melts bottle caps down and forms them into furniture.

“We picked up the caps from the school. Then we packaged them up in boxes and shipped them off!” said Jeffrey Heim, facility supervisor at Graham Packaging.

Graham Packaging was proud to help out the Earth Savers. Being a company that makes plastic, they felt that any way to reduce plastic pollution would be a great way to give back to the environment.

“Seeing the younger generation concerned with environmental issues is very important to us,” said Wise.

As for the Earth Savers, they are already hard at work sorting and cleaning bottle caps for their next picnic tables which they are planning on placing at Central York Middle School. Heiser wanted to thank the many diligent club members who spent their time to help sort, as well as Graham Packaging for their hard work and generosity.

“The employees are professional, friendly and seemed concerned for the environment. I would be happy to work with them again!” said Heiser.