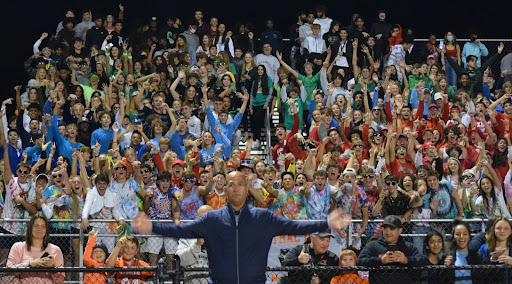 Crowds are a huge part of sports and help set the tone of the game. With students and fans returning to the stands, they have the ability to impact the game and the performance of players during game situations. Fans have the power to make or break some athletes’ psyche and can enhance or undermine concentration.

Central York football games are known for the skill on the field, and the infamous Central student section. Led by senior Alec Fahs, the student section knows how to get excited for the game. Wearing apparel that fits a different theme each week, students show up to the games with Central pride and ready to make some noise.

“Something I like about being a student section leader is having the ability to bring students together, go to games and support our school sports. The expectation is to be loud and show school spirit, and we have shown in games that we are louder and better than other student sections,” says senior Alec Fahs.

The infamous “BarstoolCY” Instagram account is responsible for posting the different themes each week. Themes such as Hawaiian, Red, White and Blue and White Out are some of the favorites among students. Students make their presence known by their apparel and loud chants.

Central York Football has had a very successful year so far, currently standing at 7-0. With wins over Exeter Township, Cumberland Valley, Hempfield, Dover, South Western, Spring Grove and a forfeit from Red Lion, Central is ranked number one in the county and number one in the state of Pennsylvania in the 6A Classification.

“Having the fans back makes the games so much more exciting and better to play. Last year the games definitely were not as exciting because fans were not allowed… [the fans] make me play harder and gets me hyped after [the team] makes a big play,” said junior wide receiver Parker Hines.

The remainder of the schedule is tougher with opponents such as Dallastown (away) and William Penn (home) to close off the 2021-22 regular season.

“It’s nice seeing friends of mine and students around the school coming to our games every week. It definitely makes me want to play better,” said junior defensive end Collin Glassmyer.

The Panthers hope to remain undefeated for the remainder of the season, claiming the county title once again. Friday night lights are something students look forward to during the week. With the team’s success, it makes the games very exciting to attend and creates a stronger atmosphere.