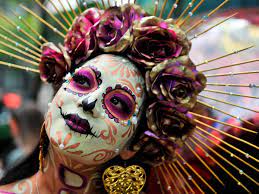 People celebrating day of the dead will often paint their faces as sugar skulls.

Halloween is celebrated differently around the world

Halloween is coming up, and for many Americans it is a day of candy, horror movies, and spooky times. However Halloween is celebrated differently all around the world.

Halloween originated in Ireland, and many of Ireland’s customs have transferred to America, however they also have a few new traditions. After trick or treating, kids and teens will then go to parties and play some games. Such as “snap-apple.” An apple is put on a string and the person must bite the apple. Treasure hunts are also made, with candy or pastries as the treasure. The Irish also play a card game, with candy or coins under the card. When a person picks a card, they get whatever is underneath. A traditional fruitcake called Barnbrack is often eaten, and is believed to predict the future.  A treat is baked inside of the fruitcake, if they find a ring, the person will soon be married. A straw means that a weird year is about to follow. A child prank called “knock-a-dolly” is often played where they will knock on the door and then run away.

“There are also plenty of special events held across the island, including Derry’s huge Banks of the Foyle Halloween Carnival — a street party with thousands of costumed revelers — and bigger cities, including Dublin and Galway, host grand parades and street fairs,” said Margot Bigg, a freelance writer who often writes about culture on Insider.

In Latin America Day of the Dead or ​​Día de Muertos is a festival of remembrance. Celebrating the loved ones that have passed, and wishing them a good afterlife. This is quite different from the spooky horror that Americans associate Halloween with. Traditions for day of the dead include setting out altars of family, and visiting graves with offerings of candy skulls.