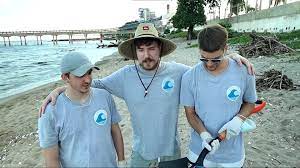 Mr. Beast (middle) teams up with other Youtubers to clean up Gringo beach in Haina and Fuerte San Gil, in the National District of the Dominican Republic.

As of Friday, 2021, Donaldson and Rober announced on a Jimmy Kimmel live show that they would be tackling the ocean’s large amounts of trash next.

“The ocean is like a superhighway for plastic debris, and every nation with a shoreline has a sliproad on to it. Regardless of where it comes from, once plastic enters the ocean, it’s everyone’s problem,” said Laura Tretheway, a freelance journalist who focuses on oceans, on The Guardian.

Donaldson and Rober are now trying to combat some of the 5.25 trillion pieces of plastic debris in the ocean with the new hashtag #TeamSeas. For every dollar in donations, he will be working with the Ocean Conservancy and The Ocean Cleanup to remove one pound of trash. Thousands of content creators have also stepped up to help with donations, they hope to reach 30 million dollars by the end of the year. They are already exceeding expectations with over 10 million dollars raised in the first three days.

“Most creators, I’ve messaged thousands, and almost every single one of them has said, “Yes, how can I help?” They weren’t saying, “What’s in it for me?” or “I don’t know.” They genuinely want to help out,” Donaldson said.