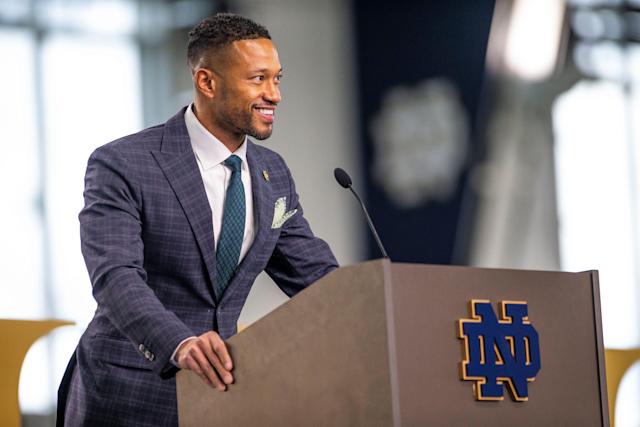 Marcus Freeman at his introduction press conference for Notre Dame

Marcus Freeman has been named the 30th Head Football Coach at the University of Notre Dame. Freeman will be introduced on Monday, December 6 at a press conference and will coach the Irish in their upcoming bowl game against Oklahoma State.

In Freeman’s first season with Notre Dame, he created a very successful defense that includes a number of Top-20 national rankings. Irish rank sixth nationally in interceptions and defensive touchdowns. It is safe to say that Freeman knows how to manage a football team.

Prior to coming to the middle eastern part of the US, Freeman spent four seasons as the defensive coordinator at Cincinnati, where he was named the 2020 247Sports.com Defensive Coordinator of the Year. The Bearcats defense ranked in the Top-20 nationally in several categories for 2020-21, including being ranked 13th in total defense.

During a Dan Patrick Show appearance, former Cincinnati Bearcats defensive coordinator and assistant Marcus Freeman told Patrick that he could not root against Cincinnati on Saturday in the ACC title game against Houston.

Freeman is a very thoughtful person who cares deeper than just football. He talks about how he cares about the well-being of his players, faculty and staff.

“That’s why doing it at the University of Notre Dame is so special. It’s special because of the people. The people here make this opportunity special… being the leader of this program is about understanding that to be successful on this journey, it’s going to take others, and we’re going to have to do this as a team.”