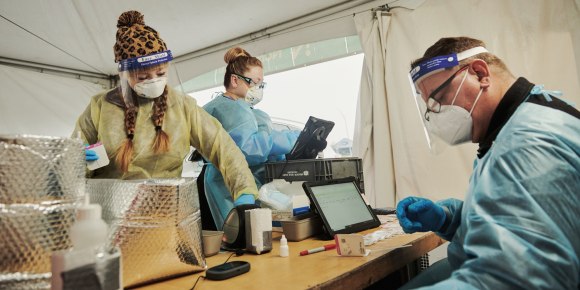 Doctors warn that it may be difficult to differentiate the omicron variant from a regular cold.

The latest news about the omicron variant

Almost a full year after the global COVID-19 outbreak sent our world into lockdown in March of 2020, further news surrounding the virus is coming to light.

On Nov. 24, a new variant of the disease was revealed, called the omicron variant. Although information about the strain is limited due to its newness, the variant, which was first detected in the Gauteng Province of South Africa, appears to be relatively mild.

“What we are seeing clinically in South Africa – and remember I’m at the epicenter of this where I’m practicing – is extremely mild. I’ve spoken to other colleagues of mine and they give the same picture,” said Dr. Angelique Coetze, chair of the South African Medical Association.

According to early reports, omicron is characterized by “flu-like” symptoms, which include a dry cough, fever and body aches. Although a loss of taste and smell aren’t common, such as they are in the delta variant, omicron has a high number of mutations and an increased risk of reinfection.

At press time, 19 states in the U.S. had reported cases.

“We’ve really got to be careful before we make any determinations that it is less severe…but thus far the signals are a bit encouraging,” said Dr. Anthony Fauci, Chief White House Medical Advisor.

Although information regarding the severity of the omicron variant is highly positive, restrictions have been reinstated in some countries as a precaution.

Great Britain, for one, is reinstituting international travel bans and mask policies. The U.K. Health Security Agency expects the omicron variant to be the dominant strain there in two to four weeks.

Meanwhile, individuals who have already endured COVID-19 are urging the public to stay vigilant about safety protocols.

“You really don’t understand the vulnerability of the human body until you face something like this. My message is for everyone to take more seriously what the impact of this can have on a person,” said Nic Brown, a 38-year-old from Ohio who was previously hospitalized with the virus.

News about the omicron variant can seem daunting, but the decreased severity of symptoms, as well as lower infection rate among those who are vaccinated, is a beacon of hope.

“If it generally is causing mild disease and if, as I suspect, the booster campaign will go a long way to still reduce hospitalizations and deaths, hopefully we won’t have to live under restrictions again,” said Paul Hunter, the professor of medicine at the Norwich School of Medicine.