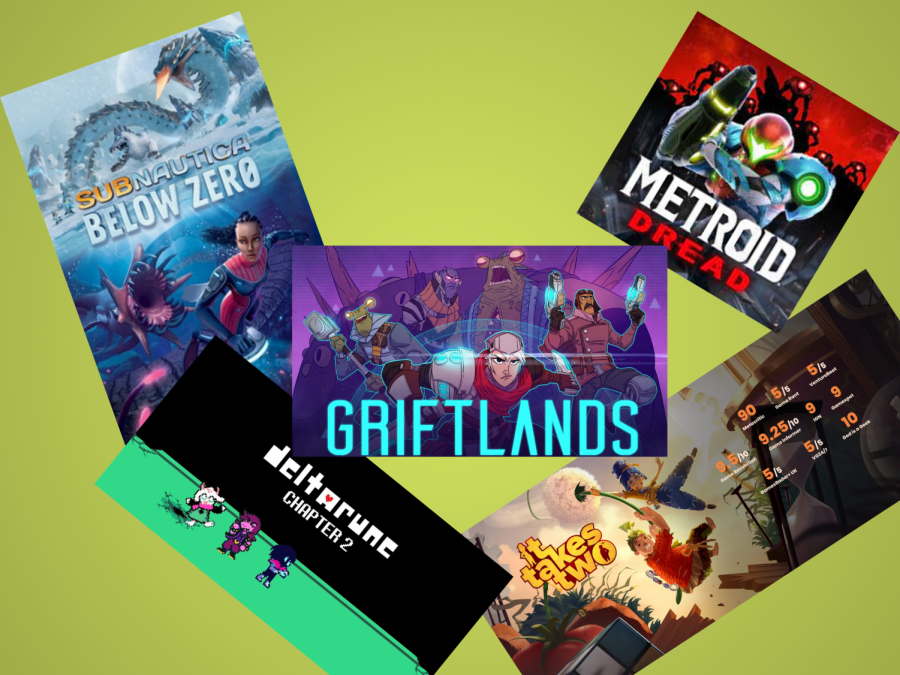 A small selection of popular games that have all been released over the past year.

Every year, video game companies from all over the world produce thousands of games. 2021 was no slouch, carrying many gems amongst the sea of the market. Let’s take a look at the top five best games from the past year.

In the fifth-place spot is Subnautica: Below Zero. This is the sequel to Subnautica, a critically acclaimed game from 2014. Both games combine survival mechanics with ocean exploration. After crash landing on a mysterious planet, you must scavenge the wreckage and utilize different fauna and flora to survive. Below Zero builds on that by sticking the player in an ice-cold environment where freezing is now a possibility.

Subnuatica: Below Zero is much more story-driven, unlike its predecessor. The story involves a mystery that has players working through a series of beautifully crafted environments to solve it. Below Zero may have the story advantage, it does not have the scope of the original Subnuatica, which makes it fifth on this list.

“The map itself is significantly smaller than the original Subnautica’s. I couldn’t help but feel disappointed when I reached the map edge only about 10 hours in and said to myself, ‘Wait… this is it?’” said Leana Hafer, reviewer for Imagine Games Network.

Just passing Subnautica: Below Zero is the game It Takes Two. This extremely popular March release has been given many awards and nominations, as it appeals to just about anyone.

“Here’s how good It Takes Two is: my wife wanted to play it with me. And she’s never had much interest in video games,” said Matthew Pollesel, journalist of GamingAge.

It Takes Two follows the adventure of a struggling couple on the brink of divorce. Their child, trying to save the marriage, traps her parents in dolls and the parents must set their differences aside to get back to their bodies. Two players must take control of each parent in an array of wacky and crazy puzzles and challenges. This game’s biggest flaw comes from the said two-player mechanic, as it is exclusively a two-person game. Solo players must find solace in other games, which puts It Takes Two in fourth place.

Moving on, Nintendo’s Metroid Dread takes third place on this list. Dread is the latest in the Metroid Series and gave fans quite the wait. However, that wait was well worth it, as Dread introduced many new horror elements to the strategic and memorable gameplay that has defined the series. Dread focuses more on overcoming that horror, which is different from many other games, and earns it the third spot on this list.

“This game is about standing against fear and fighting it to surpass it. That part of it is most important,” said Yoshio Sakamoto, producer of Metroid Dread.

From one long wait to another, second place for the top video game of 2021 goes to Delatrune Chapter Two. Released in September, this is the next game in the Deltarune franchise, created by the phenomenal Toby Fox. Fox has is well-known for single-handedly creating Undertale, which was extremely well received. Deltarune Chapter One was released in October 2018, making fans wait three years to see their favorite and memorable characters again.

Chapter Two follows the similar turn-based style of Chapter One and adds much more on top of it. Aside from the gameplay, the biggest addition is the humor. Deltarune Chapter One was very serious and laid the groundwork, while Chapter Two really kicks the story into full gear, allowing the characters to really bond, which creates many funny and laugh-out-loud moments. This humor is not present in many games nowadays, which makes Deltarune Chapter Two second to only one other title.

“Just an hour into Deltarune Chapter Two, the game’s sullen hero, Kris, is negotiating deals with monsters made of website popups. This game is hilarious,” said Ana Diaz, games writer for Polygon.

The top spot for the top video game of the year undeniably goes to Klei Entertainment’s Griftlands. Griftlands is set in a post-apocalyptic society where you must be careful who you trust. There are three different storylines to play through, each with shifty characters and life or death decisions to make. Whether you are hunting for revenge, playing both sides of a rebellion, or just dealing with family affairs, Griftlands has something for you.

One thing that sets Griftlands apart from similar games is its two-deck system. Whenever you encounter someone in Griftlands, you have the option of using your fists or your words, making each interaction a new experience. These encounters are done using different types of cards, hence the deck system. These cards can range from giving a compliment in negotiations to taking cover in battles. With so many different cards to be used, there are endless possibilities of strategies to be used. This in combination with an intriguing story makes Griftlands the top game of the year.