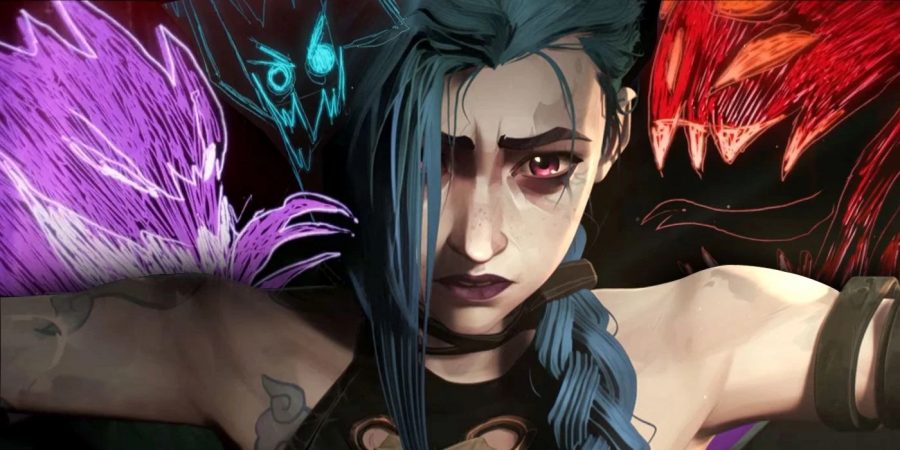 Arcane visualizes Jinxes schizophrenia with different triggers forcing her to relive past traumatic experiences that shape who she becomes.

Arcane: League of Legends show has mastered the art of animation and storytelling

Like a good dose of shimmer, a highly addictive substance in the show, Aracne has been sticking in the minds of those who make it through even the third episode. This show has seen fantastic reviews, with a 100% from Rotten Tomatoes, a 9.2 out of 10 from IMDb and 10/10 from IGN.

Set in the League of Legends universe, Arcane follows the rise of different League champions in the “city of progress” Piltover, and the pit of darkness the higher-ups want to forget about, Zaun.

League champions Vi and Powder/Jinx grow up with the shady deals and poverty of Zaun. With no parents except for their father figure Vander, they mainly rely on each other for emotional support and growth. However, the sisters and friends decide they want to find their own money and prove their worth to the world. They hatch a plan to perform a robbery of an auspicious scientist, Jayce, who is working with illegal materials. As expected, the robbery goes wrong and now, not only are Piltover enforces looking for the four children who have blown up a building, but inventor Jayce is now being put on trial for his possession of mysterious blue orbs.

The writers, Christian Linke and Alex Yee definitely know how to draw in an audience, with not only the storyline but the characters. Every character has complicated and complex qualities that can be understood even when they are the villian. Arcane even mastered the trauma and the psychological damage that some of these characters face.

One of the first things Arcane does to draw in fans and show the emotions of the different characters is the art style.

“Blending 2D and 3D, the animators from French studio Fortiche make you feel as if you’re watching a three-dimensional oil painting. The production took an eternity, and the hard work definitely shows. Just as “Spider-Man: Into the Spider-Verse” pushed the limits of 3D animation, so does “Arcane,” said contributing writer Nate Wheeler on The Wesleyan Argus.

The artistic style blends beautifully with the incredible song choices and compositions. The main composer Alexander Temple with Alex Seaver have managed to create music that causes the viewer to experience intense emotions. The show also has many songs from popular artists. the main title sequence “Enemy” by Imagine Dragons combines perfectly with the art to match the vibe of the show.

“I’m genuinely, happily, surprised by Arcane. And that’s perhaps the best experience I can get from a show anymore.  In a way, I sort of can’t believe it. And I really can’t believe I saw a show this good without being told by all my friends and hundreds of ads that I should watch it,” Tim Fluharty said on an audience rating summary.

Aracne has currently been nominated for three different Annie awards, which the Los Angeles branch of the International Animated Film Association presents each year to recognize animations in film and television. With all of these expert qualities, Arcane definitely deserves all of the raving reviews and recognition that it has received so far and will most likely continue to gain.