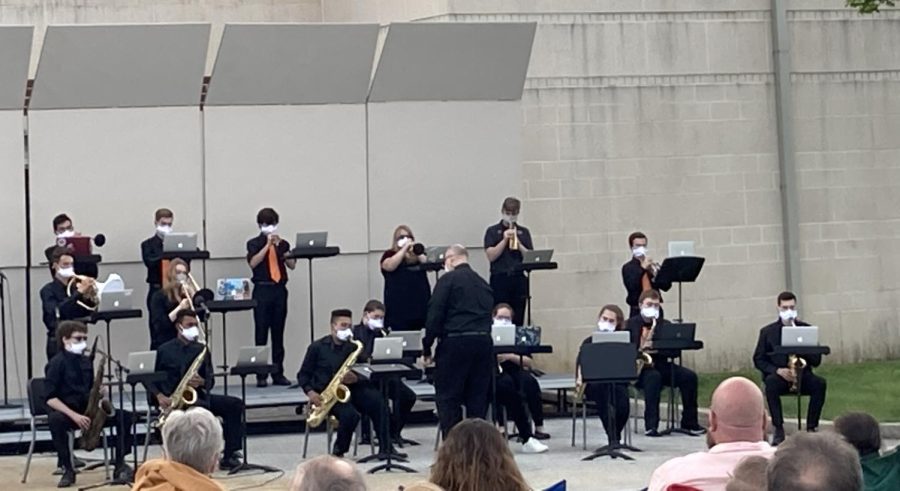 The Jazz Night of 2021 shows just how small Central Jazz is compared to the over 70 members in the CYHS Concert Band.

Why Central Jazz is underrated

Many activities and sports at Central York High School (CYSD) like football or hockey catch headlines whenever a game is played. One activity that does not get that type of recognition, however, is the Central Jazz Band.

Central York School District is well known for its renowned band program. The district has been listed as one of the best communities in America for its musical education not just once, but 14 times!

“Music is core and fundamental to education because it enriches the quality of life, is universal in nature and provides a cultural connection,” said James Martini, band director at CYHS.

The jazz band is no slouch either, as it has been around since the 80s. It stays in time too, playing many tunes and variations to fit modern interests. This allows audience members and the musicians themselves to relate to the music much more and enjoy themselves while either listening or playing.

Jazz is all about improvisation. Concert bands always have written in music, with set notes and rhythms to follow. Jazz is different by incorporating much more creativity and enthusiasm into students. Most jazz selections involve a break for soloists. The selections Central Jazz picks are no different, and students can play whatever they like to fit into the groove.

“Jazz is more player-led with improv solos and complex musical elements that cannot be conducted in a concert band which makes it all the more fun!” said Central Jazz percussionist and senior Aaron Kibler.

Selections within the Jazz band are also completely different from concert arrangements. Concert Band songs are usually very consistent and concise, involving rhythmic patterns similar to the music of the Classical and Romantic eras. Jazz on the other hand keeps things fresh, playing anything from the Roaring ‘20s to modern jazz music. This vast difference gives students a much broader horizon and allows them to let loose.

“Jazz Band provides an opportunity for everyone to play ‘America’s Music,’” said Martini.

The best part about Central Jazz is the performances. The band usually performs twice a year, once at Cherry Lane Park in York, as well as the underappreciated Jazz Night which takes place at CYHS. These performances are outdoors and well-received, allowing attendees to relax and listen to music that they might not listen to that often.

“The jazz concerts, in general, are just super upbeat and fun to play in,” said Central Jazz trumpet player and senior Ryan Smith.

Compared to other organizations at CYHS, Central Jazz just does not stack up in popularity. Rarely ever a great jazz rehearsal or performance is spoken about around the halls, but the most recent Central Football Game is the talk of the school.

While Central Jazz might not be the most popular school activity, it will always be known in the hearts of the players as an opportunity to show the best of themselves musically.