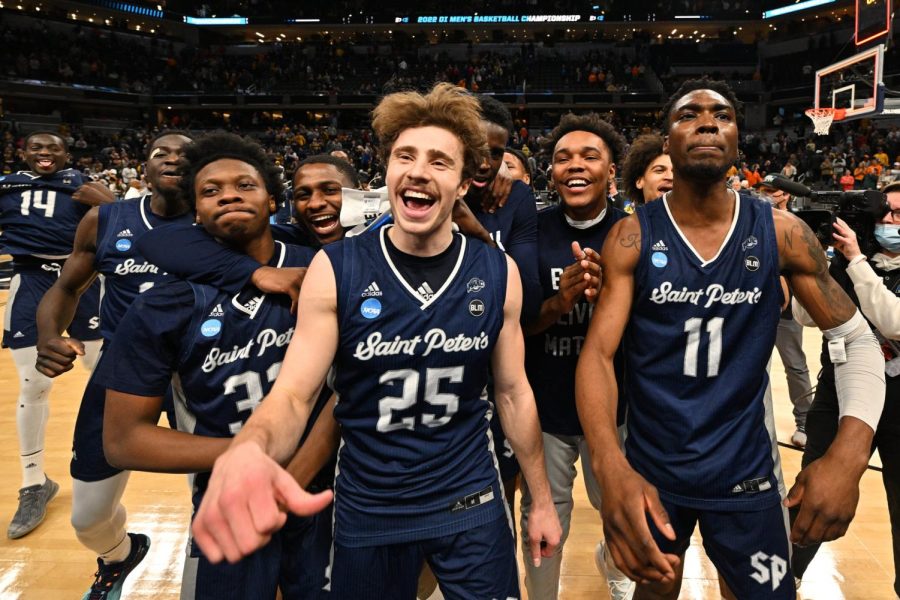 It is safe to say this year’s March Madness has been one for the books. With teams that are seeded 15 making the Sweet 16, to countless upsets causing broken brackets, fans have definitely been entertained in the third month of the year.

The reason March has been so exciting is due to all the shocking upsets. The first game of the first round was the first upset, as the Michigan Wolverines rallied from a 15-point deficit to beat Colorado State 75-63. The Rams were outscored 62-35 in the last 25 minutes.

“Being down 15, we could have easily just said you know what, it’s time to pack it in. But we are not built that way. That’s not what the Michigan culture is all about,” said Michigan coach Juwan Howard.

Howard was able to face adversity and criticism to bring his team to the Sweet 16 after beating No.6 Colorado State and No.3 Tennessee, two difficult teams to face in the first two rounds.

One of the hottest teams coming into the National Collegiate Athletic Association (NCAA) tournament chose a terrible time to go cold. No. 12 Richmond was able to take down the streaking No.5 Iowa, a fan favorite to make it far in this year’s tournament. This is the 52nd time a No. 12 seed has taken out a No. 5 since the tournament expanded to 64 teams in 1985. The Hawkeyes shot only 36 percent and had a hard time from the 3-point line, only hitting 6 of 29 attempts.

“Once you get past the conference or the size of the school or whatever it is, you’re just playing, and then you’re starting to focus on the Xs and O’s,” says Richmond coach Chris Mooney.

Perhaps the biggest moment in the NCAA tournament so far is from a school with an enrollment of only 2,300. The Peacocks of Saint Peter’s were able to top the No. 2 seed Kentucky, another favorite to win the national championship. Saint Peter’s has put Jersey City on the college basketball map due to the aggressiveness and grit of this hard-working team.

Saheen Halloway is the coach of the Peacocks, and has a reputation in the high school, prep, junior college and college basketball communities from all over the country. Halloway has been able to run a strong-minded team in which players are not caught up with names on the uniforms. The integrity of the program has allowed Saint Peter’s to become one of America’s favorite teams, as well as a Cinderella story.

Halloway in an interview was faced with the question, “do you like underdogs and underdog stories?” He responded, “I love it ’cause I’m the underdog story. Coming from where I came from in New York, coming to Jersey, 5-foot-10 guy becoming a high school All-American, and staying home to go to college, to believe in yourself, think that you could build a team that was down a little bit to make ’em a contender.”

For Saint Peter’s, it was the first NCAA Tournament victory in school history. In 2022, the University of Kentucky spent nearly twelve times, or $16.7 million dollars, more on basketball than Saint Peter’s. That loss made it the largest financial upset, disregarding seeding, in the NCAA Tournament since 2007.

Aside from the upsets, fans have been taking notes on a different aspect of the game. For the first time ever in the NCAA Tournament, games are played with a new Wilson basketball. According to the manufacturer, the ball has extra grip and is easier to shoot from farther away. Many viewers are saying the new balls are a very bright shade of orange. Wilson says the balls were designed for better on-court vision and detection. Wilson’s Evo NXT balls were approved to be used by college teams during the 2021-22 season but NCAA rules permit home teams to make the decision as to what brand and model of basketball they use for games.

Dallas Mavericks owner Mark Cuban even commented on the newer basketballs saying, “Anyone else watching the @iubb win and wondering what the deal was with the balls they used? They looked like the $5.99 specials from Walmart and seemed to bounce and be hard to control like them too! Anyone know the deal?”

Even if the performance of the new basketballs are improved, it’s going to take fans a little while to get used to the bright orange.

The less talked about but still equally important tournament also kicked off this month, Women’s March Madness. Coming into the tournament, Iowa guard Caitlin Clark has been one of the most talked about athletes in the world of sports. The combination of Clark’s flashy style of play, incredible stats and competitiveness has gotten the sophomore guard a ton of new fans in Iowa City and beyond. The social media sensation averages 27.4 points per game, which leads women’s college basketball. Clark also averages 7.9 assists per game, which is also best in the nation. Her Instagram following rocketed up by 30,000 in a single day last month.

After watching Clark play against Michigan, LeBron James posted her picture and captioned it, “She got so much game!!!! Tough!!!!”

Clark’s celebrity fans such as Kevin Durant, Trae Young, Ja Morant and Sue Bird have recently complimented her and her game during interviews or on social media.

The entire country now knows what Clark can do with the basketball as she’s grown into one of the biggest stars in the sport. Clark’s most defining quality is her competitive spirit. It was made by playing sports against her brothers and male cousins around the family’s home in West Des Moines.

“I got picked on, I got pushed around a lot, but I grew up playing with the boys and against the boys,” Clark said. “I think that helped me become bigger, stronger, faster, and kind of develop skill at a different level.”

Clark has been a huge inspiration to women and girls all across the country proving that women can do whatever they put their mind to. Clark is an inspiring individual to athletes as well as creating a social media following. During Women’s History Month, ​​Clark averaged 30.4 points, 7.7 rebounds and 9.1 assists per game.

Clark has brought more viewers to women’s basketball and is one of the most talked-about collegiate athletes in the world. Being compared to NBA superstar, Stephen Curry, Clark continues her journey with the Hawkeyes in this year’s tournament. Be sure to keep an eye out for the incredible sharpshooter, and one of women’s most inspiring young athletes.